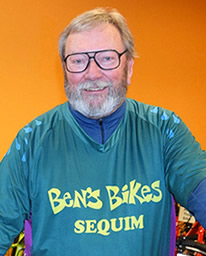 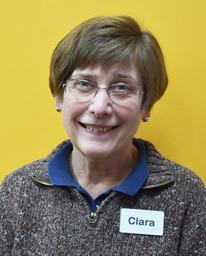 Whether it’s dirt bikes, trail cycling or day-to-day commuting, Ben Chandler planned to have a bike for the occasion. To do this, he’s brought Ben’s Bikes, a family owned bike store from Arizona, to Sequim.

Chandler opened Ben’s Bikes in 2011 after retiring from the Air Force and got help running the business from his father, Sam. Originally from Portland, Ore., Sam Chandler and his wife have visited Sequim on and off for more than 20 years and made the choice to open a second Ben’s Bikes store after looking at several different areas to expand the business in the U.S.

More than 60 years of combined experience in the bicycle industry.

Our staff keeps up to date with the newest innovations to make sure your bicycle gets the service it deserves.

Our staff is certified by Bosch to work on their power systems for e-bikes. 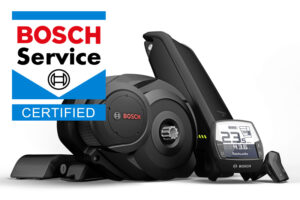 United Bicycle Institute offers the most diverse bike curriculum in the world. Since 1981, they offered bicycle mechanics courses in one and two week sessions and since 1991, they offered custom frame building courses, enabling graduates to connect with industry leaders and job boards, as well as earn a post-secondary certificate.

Michael Fortman
18:44 17 Nov 21
We bought two bikes from Ben's Bike. The customer service was top notch in answering questions we had and adjusting the new bikes to fit us for what we needed.

Gregory Wetzel
18:56 17 Sep 21
The staff are friendly at this bike shop and I got my tires switched quickly. I was enjoying the riding too much but when I got home I saw my tire was put on backwards. A quick... and simple fix so not a huge issue. However, hopefully, a closer look will be taken with the next tire change or work being done.read more

Erika Lindholm
17:15 28 Aug 21
I am every grateful to Ben's Bikes for skillfully and quickly rehabbing my Santa Cruz Blur from years of neglect to the once again best mountain bike ride I know! When I dropped... of the bike, Shane was incredibly patient and thoughtful as we walked through the bike's history and its likely future. He asked me both about the work done and the riding on the bike before and how I planned to use it in the future in order to assess the appropriate level of work to be done without over spending. He spent at least a half hour with me, talking through my options as though I was the only customer in the store (and I wasn't). I noted that other customers were attended to by other staff and if they were waiting for Shane, were greeted and explained he would be with them when he was done with me.I was surprised when he told me he thought it would be ready within 5 days,...and then my socks fell off when he texted me 2 days later to tell me it was ready for pick up! I also loved the fact that they boxed up all the replaced parts and kept them with my bike to allow me to choose whether or not I wanted them. My husband loves to learn from seeing what was replaced and at other shops, we haven't been given that option.I am so pleased that i want to give credit to Ben's for also ordering the weather on the day I picked up the bike (sunny and high 60s),...the perfect day for me to call in sick and go for the best ride I have had in years (road or mountain). THANK YOU Shane and your crew at Ben's Bikes! I am a super-happy customer!PS. Work done = replacing the entire braking system (levers, cables, disc pads and rotors), an overall tune up and chain replacement. I didn't ask for this, but the bike also was the cleanest I had seen it in a decade! You guys rock!read more

Sonya Lynn
02:23 26 Aug 21
Best bike purchase experience ever! Friendly, experienced staff helped us find the right e-bikes for us. We were able to have accessories installed on the bikes at time of... purchase - love that we did not have to come back later. They also were able to install the car rack! The friendly atmosphere, quality bikes (Townie Go! In turquoise if you please) and exceptional service is 5-star. #fangirlforlifeSmooches to staff at Ben’s Bikes!read more

roger ulm
02:45 14 Aug 21
As soon as I walked in I was asked what can be done to help me. The helpful staff immediately accessed my situation got my bike right in and made the necessary adjustments on my... bicycle that I needed. You rarely see service like that any more!read more
‹
›
TOOLSContact Us